Is it May yet? OK, ok, I know it’s only the eleventy-hundredth day of April. Bruce asked me what day it was this morning, and I told him it was Sssssssaaaaaaatttttttuuuuuurrrrrrdddddaaaaaayyyyy. And then I realized that meant it was Scrappy Saturday and I’d better get my rear in gear with a blogpost.

Would you like to hear about my ma*k-making this week? Just kidding. Although that comprised most of my sewing this week, I don’t want to share it any more than you want to read it. Suffice it to say that it’s been going on, and the end is in sight. After the current dozen is finished, I retire.

Nine-Patch Madness is a finished flimsy. And I want to thank Jennifer Caplinger (Life’s Little Adventures) again for her inspired pattern for these blocks. I could drool over her basic and beautiful quilts all day. But if I did, someone would probably lock me up.  So you’ll have to check them out and be inspired yourself. 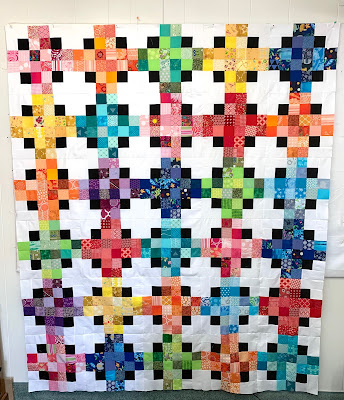 9PMadness joins Harambe Sisters 2 and On Ringo Lake in the To-be-Basted pile.  I’m going to try to get to those this week, “try” being the operative word.  And speaking of basting, what are you having for Easter dinner? We’re in a quandary here. Should we have the traditional ham or the traditional spaghetti?

Bruce is home from the hospital, after a week-long stay. After all the running around in the cootie-filled world to get his prescriptions, 4-point cane (needed for walking because of the huge groin-to-knee incision they made to harvest a donor vein), another trip back to the surgeon’s office at the hospital because he had a fever (slight infection, not the virus thank heavens), and a trip to the grocery store, we are home to stay. And at the grocery store, some idiot man in front of me in the line was blathering to the cashier about how he just couldn’t stand to wear a mask. You’ll be glad to know I let him live.

Anyway, let’s talk sewing some more, shall we? Here are my 9 Twin Sisters blocks for April. 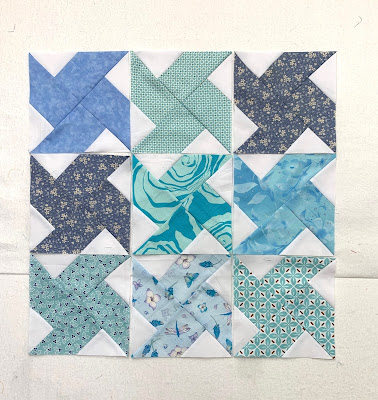 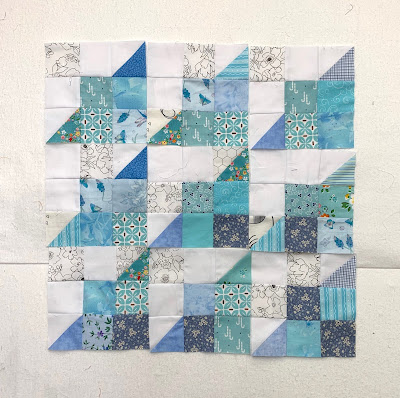 And a Scraptastic Star... 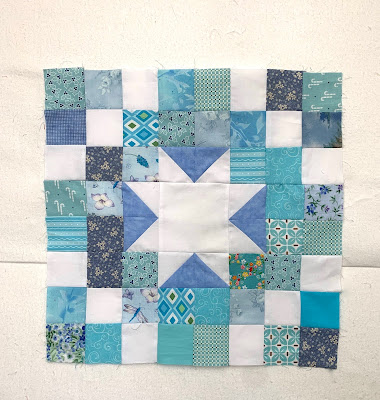 This is what my four Scraptastic Star blocks look like together. Four blocks down, five to go. Pretend they’re pressed nicely. 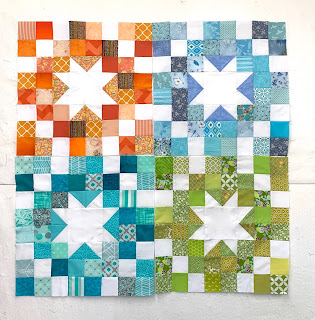 Finally, since I want to finish up an old Rainbow Scrap project, Garlic Knots (more traditionally known as Arrowhead Puzzle), I sewed up the two remaining colors that I needed. Here are six red ones ... 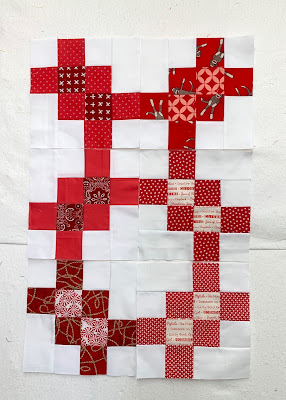 And seven yellow/gold ones 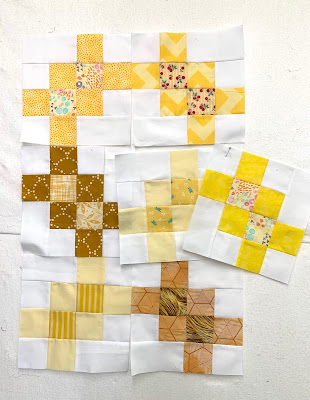 I only needed 10 more blocks, but sewing 13 will give me a little fiddle room to weed out another color if it’s too dominant when I begin arranging them next year month in May.

That’s it from the looney bin here at Chez Kizerian.
Posted by Cathy at 9:15 AM