Did you have a nice Thanksgiving (for those of you here in the US)? We were with extended family on Bruce's side. There were 21 of us, and it was a blast. It snowed lightly on Thursday, but kindly held back until yesterday to dump several inches on us. But it's beautiful, and it's the perfect time of year, so we welcome it!

As for my hands/carpal tunnel surgery, I got the stitches removed from both wrists on Wednesday. It's been 2 weeks now, and I'm pretty much fully healed incision-wise. My hands aren't numb any longer, except a small part on 2 fingertips, and the doctor says that should go away in the next few months. I am bearing good weight and pressure on them now, and have resumed all my normal activities without problems.  I even plan to pin baste three quilts this weekend with the help of Cousin Kim.

Speaking of weight, I've been actively working the Weight Watchers plan again after just see-sawing around a few-pound weight range over the last 18 months. Actually, I'd gained back about 9 of the 35 pounds I lost a couple years ago. But now 8 of those extra pounds are gone, and I was mindful of my Thanksgiving eating. I even planned for a piece of pumpkin pie and enjoyed that! Now it's time to get serious and tackle the final 25-35 pounds over the first half of 2020. I do plan to make (and partake of some) almond biscotti during the Christmas holiday season as well as some Kahlua and eggnog (lite). All doable while still losing, if I'm careful. 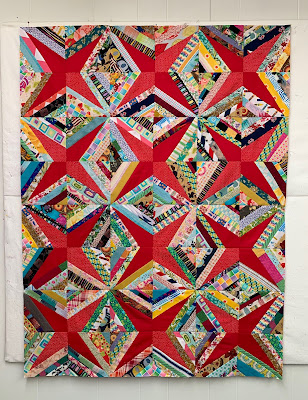 But you're here for the sewing, so let's get to that.  Here's the red string star quilt I've been working. I showed a few blocks last week. This week I completed them all - it is so fun to stitch these that I just couldn't stop! This is one of the flimsies (quilt tops) that I'll be basting this weekend.


And a close-up of a a smaller area. I ran out of the solid red, so used a similar red with dots to fill in. I love how it makes the stars look more dimensional.  To keep on top of these multi-colored strings (a lot of which I get from quilting and trimming the quilts I do for Quilts for Kids, I may do a background star - which is 4 blocks - of the Rainbow Scrap color of the month in 2020, and then just use the multi-colored strings around them. I think that might be fun! 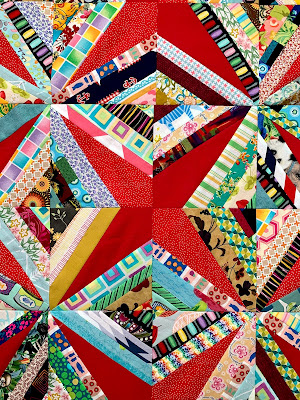 This helped make a dent in my string scraps, but I have a whole tote bag of low-volume strings that I want to make into some sort of string quilt. That idea will be put off until 2020, though, as I have some Christmas projects (zip pouches) projects that beckon.

And I'm currently working on this project for Cousin Kim for Christmas (she doesn't read my blog). 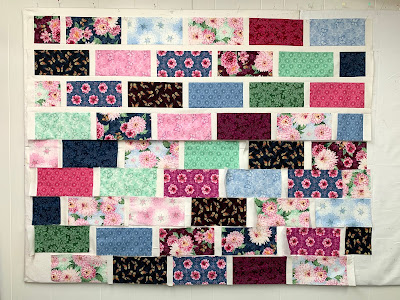 It was a layer cake (10" squares) of a line called Newport that she and I both fell in love with and bought. She made her squares into a quilt for herself, but her daughter Sarah loved it so much that Kim gave it to her. So I'm using my Newport fabric to make a quilt for Kim. The prints are big and colorful, so I wanted to find a pattern that would allow the prints to shine through without being chopped up too much. I'll sew on it today in hopes of finishing off the top. Then I can hide it while Kim is here sewing on Sunday.

Before we put the cat's play tree back into the guest bedroom after the painting that we had done, it was sitting out in our upstairs hall. Alfie "re-discovered" what fun it was to play on it while us mere mortals walked past. He could roll around, hide, swipe playfully at us - what great fun! 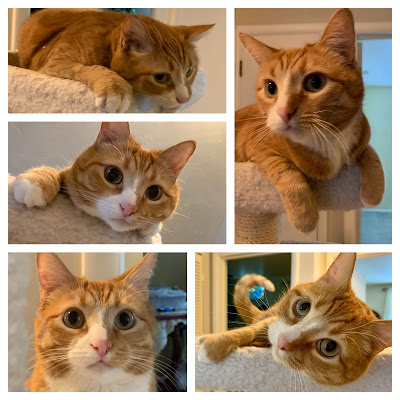 And finally, Bruce put up the tree. It's tiny, because we didn't know how our respective hands would be this year after all our surgeries, and we didn't want to try to haul up containers and bins of things to decorate. Anyway. Bruce says it's The Best Tree Ever. The Best Tree He's Ever Had in His Whole Life! He picked it out at the grocery store, bought little tiny LED lights, raided the Christmas decorations for the tiny ornaments (including a bird from the 1950's), and added a crocheted star at the top. The lights are battery operated. You'd think he was a 10-year old with an early Christmas present. 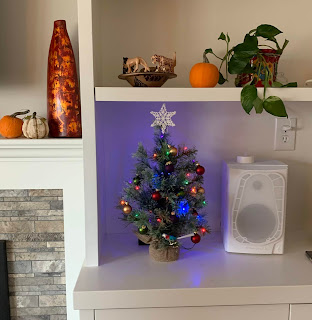 Now all we have to do is take down all the autumn decorations and beef up the the Christmas decor with a few choice decorations. That's on the agenda for today. But, that tree! (wink)

Linking up to Scrappy Saturday for the Rainbow Scrap Challenge.
Posted by Cathy at 10:58 AM