I’m sewing yellow fabric sunshine because not only is it our Rainbow Scrap Challenge color for April, but it’s about the only sunshine around here these days. I keep repeating the old saying “April Showers bring May Flowers”. I just hope that the snowy portion of those showers don’t freeze our apricot tree buds. But short of going out there and climbing the tree, draping quilts all over it (and believe me, the thought has crossed my mind more than once), there’s not much I can do about it.

Let’s see what’s emerged from under my sewing machine needle this week.....

First, I finished six Noon and Light blocks for the Block Lotto. The hostess asked for these to have a yellow background and be otherwise scrappy. The pattern made two blocks at a time, so I made a total of six, and they were fun but fiddly. 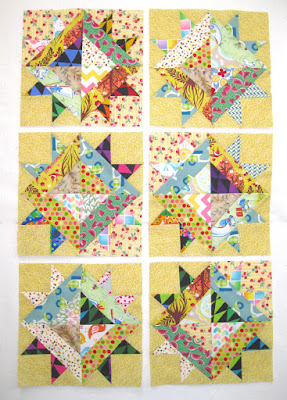 So, my name will go into the month-end drawing six times. The winner takes all. Fingers crossed.

Next I sewed up three blocks for this month’s Squared Away Sampler at the Rainbow Scrap Challenge. This is another fun block, courtesy of Mari at Academic Quilter. As she explained, this is an old block with several names over the years.

I’m really enjoying these, and have decided to make enough blocks each month to do a lap sized quilt instead of just a baby quilt. So, I’ll be making at least 3 blocks per month.  And speaking of these blocks, it reminds me that you can see others’ blocks and all sorts of yellow quilty goodness at our weekly Rainbow Scrap linkup at Angela’s So Scrappy blog.

And then my main focus turned to making more birds for my Lattice Birds Quilt.  Several of you have asked me questions about this quilt, but if you haven’t heard back from me it’s because you’re a No Reply blogger.  If you’d like to read my original post and plans for this quilt, HERE is a link. 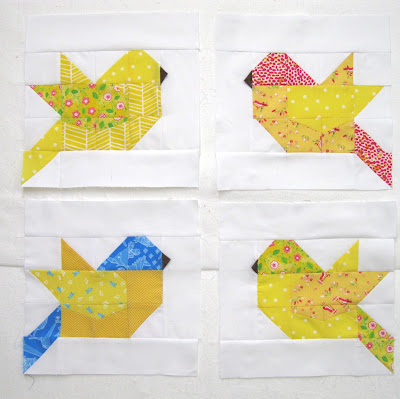 These are the four birds I made this month. I decided that while I wanted to keep each bird in a main color, that did not mean I couldn’t add accents of the other colors that will be in the quilt. One of my green birds from last month didn’t have enough contrast for me, so it may be reworked or used on the back.

And here are the individual pictures. I see that I forgot to add the corner to the top of the wing on this one, to round it out, so a little wing surgery will be required on her before she goes into the finished pile. 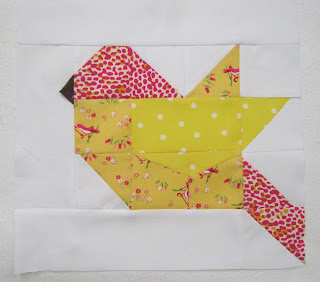 I’ve had fun cutting out bird parts and auditioning them, mixing and matching. Wanting more contrast led me to the decision to broaden the fabrics and colors in each bird. 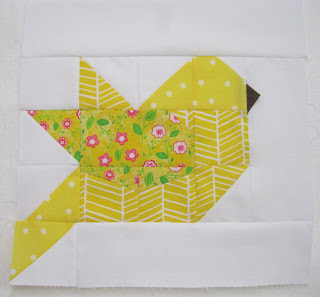 You may also notice that a lot of the prints I’ve used in the birds are actually bird prints. That is intentional! 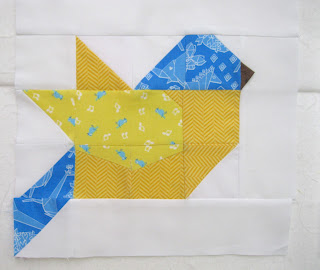 And I have dramatically increased the size of the quilt from the original 50x70 plus borders to a queen sized quilt. So, instead of me making 17 birds, I’ll be making 31. And the number of lattice blocks, which I’ll sew during our next RSC Blue month, increased too. 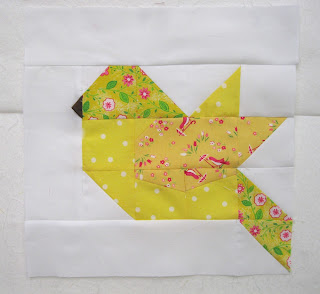 Now here’s a picture of the whole flock (minus one) together: 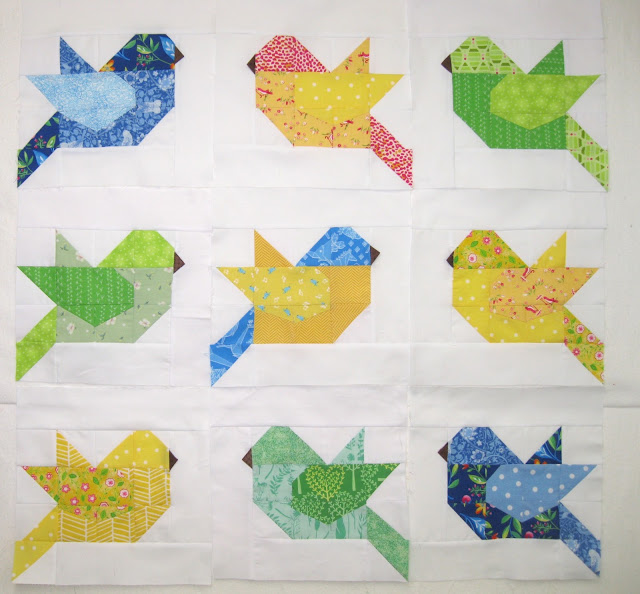 Can I tell you again how much I am loving these birdies?!!  And there are plenty more to come - lots more blue and green, some in light and dark pinks, some orange, and of course some in mixed colors. A few of these need minor surgeries to become more uniform as I’ve tweaked the pattern here and there. But there is no law (not even the Law of Nature!) that says they all have to be identical!  :-)  That’s always my excuse for being an oddball sewist! 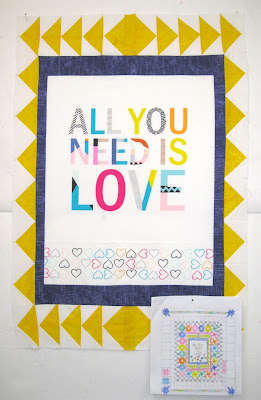 And finally, it’s probably time to introduce this project, although it’s been planned for my daughter Megan since last year. It’s called All You Need is Love. Or Love is All You Need, whatever. It was a small pod-like collection (they had some name for it) by Art Gallery Fabrics (Mr. Domestic). Megan is a Beatle fan - came by it naturally from her dad and me, LOL. Anyway, we decided on a medallion quilt with this as the center panel. But she wanted a rectangular quilt, not a square one. So, the navy blue border around the center is 1” on the sides and 2” on the top and bottom.  The yellow flying geese (which look more gold in this picture but are really yellow) are all positioned to add more length than width. The next round is a simple border again, in pink. It will be done in varying widths, like the blue.

The next rounds are split between various colored blocks, a black and white checkerboard, and other ideas. But what I’ll be doing is sewing up the pre-planned blocks whenever we get to a new color. So, for this month’s yellow assignment, I have 8 various blocks to sew. I’m going to try to have those done for next week.  There are no green or purple blocks in this quilt, so the only color I’m missing is the blue - and I can do those when we come around to blue again later in the RSC year.  :-)

* * * * * * * * * * * * * * *
So, the trip I’ve been planning to Kenya was off, and is now on again. That is supposed to be in July, if all goes as planned. I’m trying to get my deposit in, but the flakes dear souls who run it have yet to send me the link. My daughter-in-law Kim and granddaughter Lauren are going too. If I don’t hear something definitive by next week, I may just bag it and go with Bruce instead to a local Jackson Browne concert here in Salt Lake in July. Decisions, decisions.