Autumn in the Rockies

We were finally able to get away to take our long-awaited vacation this year. You may recall that we had to cancel our annual winter trip to Arizona to visit family because Bruce was undergoing arm surgeries for the sarcoma in his right forearm. His scans and tests from earlier this month reveal that it has not returned, which was great news. And with my brother living with us until spring, we had a built-in house and cat sitter. Or should I say that the cats still had someone to supervise?.....

Our drive to the YMCA of the Rockies Snow Mountain Ranch park near Granby, Colorado was a very pleasant 7-hour drive. An hour of that was in Utah, then about 3.5 hours in Wyoming and the last 3 or so in Colorado. The altitude of SMR at the lodge was 8,700 feet, but our cabin was much higher and near the outskirts of the park. We figure it was about 8900-9000 feet. Even for those of us who live at altitude (Salt Lake is about 4750 ft elevation), it was a noticeable difference.
We met up with two couple friends and one other single woman, so there were 7 of us total. Our cabin, called Eagle’s Nest, had 5 bedrooms and 3 bathrooms, a gas fireplace, fully stocked kitchen (dishes, silverware, pots, etc), televisions upstairs (not used) and downstairs for the guys. We ladies stayed upstairs and spread out over the living and dining areas there to do our hand stitching and machine sewing.

Connie and Willy brought their puppy Finley, who is an amazing, sweet and cute puppy at 8 months old.  He loved all the attention from all his new aunts and uncles. And with two dog parks and plenty of hiking paths, he was never bored! 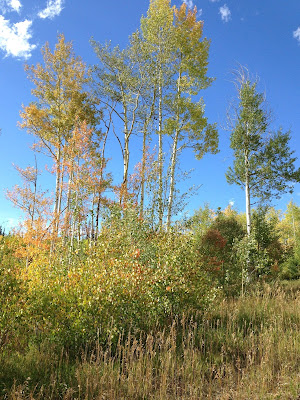 The weather was cool and gorgeous most of the time, but it did rain a lot one night and morning. One afternoon Bruce and I took a hike along one of the trails.  At the trail head, there were huge signs telling you what to do if you ran into a bear, a cougar or a moose. Yikes!  Luckily, we didn’t run into anything except a lot of horse droppings as this was obviously a horse trail.

The way into the forest was down, and I was a bit concerned about going down too far and then having to climb UP to get out. But I needn’t have worried; we just took our time and snapped pictures, marveling at the beautiful landscape and turning colors. 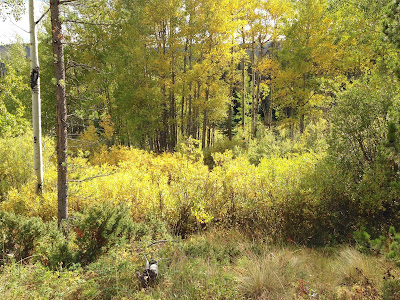 The first night (Thursday) we all ate at the lodge. After that, Connie cooked all the dinners because she volunteered. Breakfasts were things we had all brought, and lunches were leftovers from dinner or things that the rest of us had bought at the supermarket in Granby. The meals were great (thanks, Connie!), and the rest of us split the cleaning chores. Other than that, we just stitched, gabbed, laughed. The guys watched a couple football games and NASCAR when they weren’t playing with Finley, walking or eating. Bruce did a lot of reading, too. There were several nice chairs and benches on the balconies, and they wrapped around the cabin, so you had your choice of view, sun, etc.

All of us had so much fun, that we are all doing this again in June 2018, same place, same cabin. We’ll see if we like spring or autumn better, then make it an annual gathering! We all checked out on Monday, and Bruce and I drove 2 hours to Buckley Air Force Base in Aurora to stay with his daughter Emily and her family. 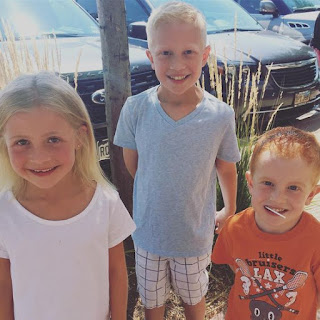 The kids (except the youngest, Gunner) were in school during the 2 days we were there, but we had plenty of time after school and in the evenings to play with them. We came bearing gifts, of course (isn’t that Rule 2 of The Grandparents’ Code?). We went out to dinner one evening and Emily cooked yummy fajitas for us the second evening.

One of our favorite memories was spending time in Barnes & Noble with them as they deliberated on new books and a new toy from Grandpa and Grandma. Or maybe it was the bedtime reading; Emily read to Gunner, Bruce read with Deacon (Deacon did the reading) and I got to read with Abbie (who also did the reading). Or maybe it was the walk around the base with Emily and their boxer Bailey, talking of all sorts of things, or Gunner playing in the backyard while Grandpa read, or me playing American Girl dolls with Abbie, or Bruce teasing the kids that the large white domes on base were really houses for aliens (the kids  knew they were really satellite domes)......  We can’t wait to see them again in June!!!

Now we are back home, the unpacking is done. A day or two of laundry, clean-up, grocery shopping and errands...... and it’s back to the old routine. It was a great trip!