For years I've been patiently waiting for the right treadle sewing machine to come along. My preference was for a Singer, in good condition (relatively speaking; some work is always expected. I just didn't want a "beater"). And the price had to be under $300. In past years, we ran into some here and there, usually in the $225-275 range and in poor condition. I haven't seen ANY at all in the last year. But on Friday morning I saw an ad for an Estate Sale here in Murray that started at 10:00 a.m. and mentioned a treadle sewing machine. 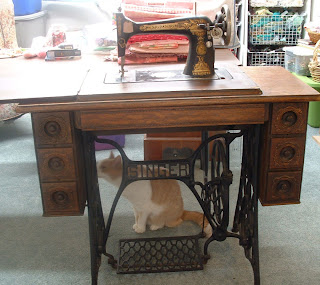 I work until noon and decided to go after I got off; if it was still there (and met my requirements), then I might get lucky. Well, I got lucky, indeed! It was there, it was a Singer, it was lovely (although it needs to be cleaned up!!) and they were asking..... $175. After checking it out for about 20 seconds or so (hehehe) I asked the sale manager if it was sold. He said no, so I told him "I'll take it!". 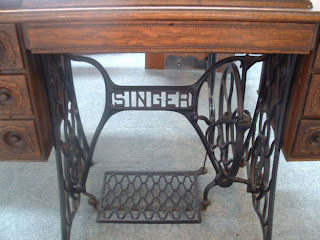 I wish I could've staged these pictures better, but I had to get it down in my studio, and I haven't yet rearranged everything to accommodate it. 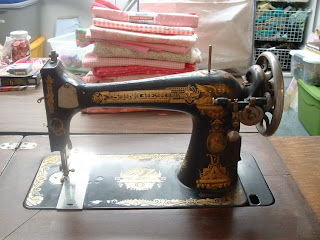 The belt is broken, but it can be replaced. It's not difficult to replace the parts (at least it won't be once I remember the name of the website that sells them. I guess I need to join the Yahoo treadle machine group...) 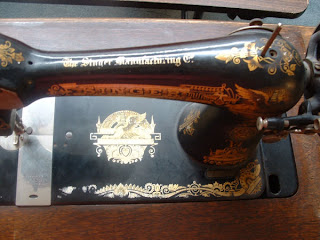 I also need to learn the proper way to clean it up, because I don't want to lose any more of the goldwork (decals) on it. 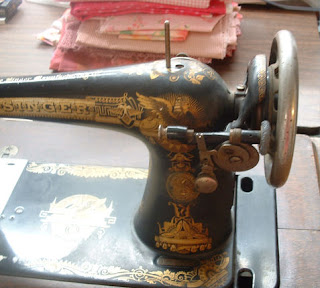 They were even kind enough to load it in their truck and deliver it to my house! 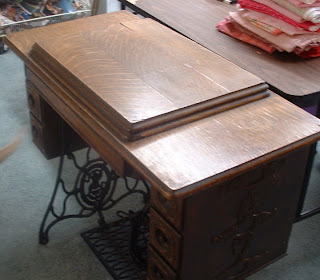 It might be difficult to see, but the side panels have some lovely carvings attached. This is a Model 127, and per the serial number, was manufactured somewhere between 1916-1918. 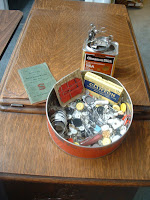 Included with the machine were a box (the tea tin, above) of parts and extra feet, as well as the original instruction manual. They also threw in a round tin of "goodies", which includes lots of vintage buttons (including some mother of pearl), diaper pins, and other treasures. 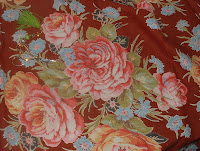 And then they kept on giving! This fabric was displayed near the sewing machine, and they just threw it in free when they realized I was admiring it. It's about 25 x 60 inches and must've once been a curtain panel. It dates from the twenties to forties (I'm not that "up" on my fabrics" and almost looks like a barkcloth, except it's not quite that heavy. 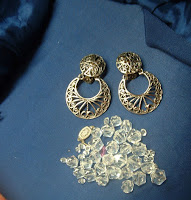 I also bought a cute little suitcase for storage. You can see the inside (blue) is very nice. The crystals were sitting in a jewelry box full of costume jewelry. I grabbed them and the earrings. They charged me a dollar for the earrings and threw in the crystals!


On top of the suitcase (below) are a group of 11 cards of vintage buttons. They were in a cute jar (which I've since washed and saved) for $5.00. 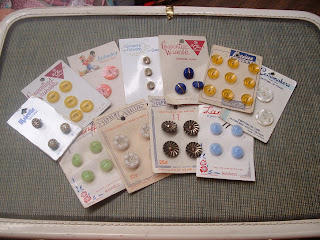 There were lots of nice linens there, but all appropriately priced as (nice) vintage pieces. For my work, I generally look for "cutters" - those that have been well-loved and may have some stains or rips. I don't feel so guilty about cutting those up, and they're more in my price range, LOL! The set below (and I forgot to include the 36" square tablecloth) was $2. The vintage spool of wool thread was $5. 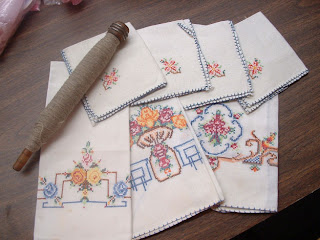 This table runner was badly stained, but I couldn't resist the embroidered lady. Definitely a woman of the fifties, wouldn't you agree? And it washed up soooooo beautifully, LOL!!! Worth all of the $3 they charged. The three stains that remain are in the middle between the identical motifs at each end. You can't see them in the picture, but they're several inches above her head in a section that will eventually be cut away. 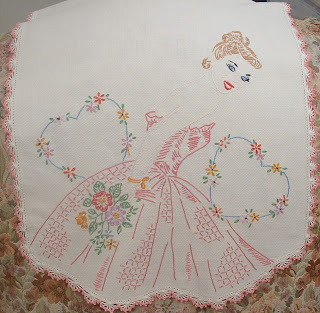 And I ran across a wad (literally) of aprons in the kitchen...... They were asking $5 each, but I offered $20 for all six and they accepted. 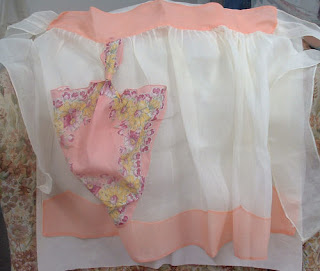 The apron above has a hankie pocket. I'm not sure it was ever worn - it's still so crisp! 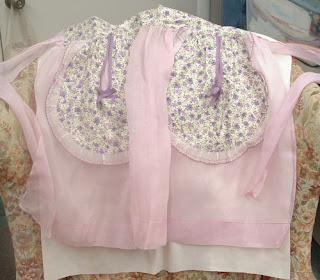 The lavender apron above has two wild pockets; I've wanted an apron like this for a long time. The pockets are cotton fabric & the body is chiffon (or organdy, or whatever. I admit it - the terms confuse me). What excited me about this apron is that I have some vintage trim identical to that around the pockets, only in black & white. Now I know how to use it!!! 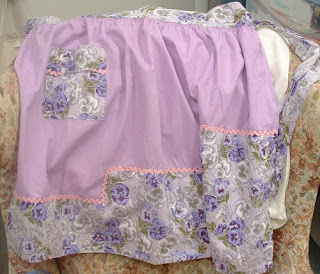 The lavender apron above has pansies and rick-rack. I believe most of these aprons were for a large woman. 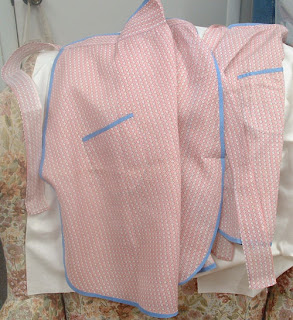 The two aprons above are identical, although one is unused and crisp (although needs a wash to remove the yellowing along the fold lines). The right one is limper and stained. I wonder if she worked in a diner and these were part of a uniform?? 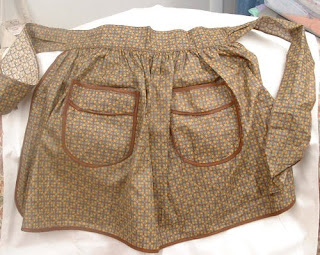 And this cute little girl's apron was in like-new condition. They will all be great additions to my collection and provide lots of inspiration and a source of some interesting patterns!!

On the next morning, Saturday, Bruce and I went back to the estate sale together, because I had seen a mirror that I thought would look nice in our newly-redecorated bedroom. I'll tell you the story of that in my next post after I get some pictures of our bedroom. I'll just say ..... dang, I'm good! LOL. The mirror looks great! :-)