All year I’ve been making a single-colored quilt every month, following along with the Rainbow Scrap Challenge (RSC) color of the month. I call them Creature quilts just for fun in naming them, plus they are donated to Quilts for Kids to provide creature comforts. Well, for purple August, I needed another color in addition to purple to get the quilt up to a good size. Long ago I chose orange as the additional color because it’s one of my favorite colors, I have tons of orange scraps, and I love purple and orange together.

Originally this was going to be Creature From the Molten Volcano, but the sad truth of my scraps was that there was no volcano to be had. Or sewn. It was just not a viable creature. So, like Elvis, it left the building, folks. And who entered then? Why, it was the Creature from the Sunset Savannah! (YAY!!) I present to you this quirky creature... 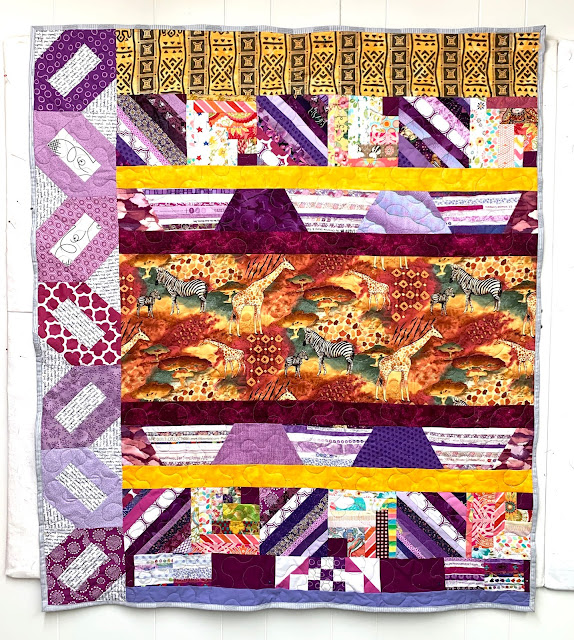 The very loud Creature from the Sunset Savannah finished at 44.5 x 52”. It’s my 33rd quilt finish this year, which is one more than all of last year combined. Of course, most of my finishes have been smaller (less than 60” on all sides), but some have not. They are mostly just utility quilts for donation, and sometimes when I take pix, they look a bit wavy. But they’re always square and look much better once they’re laundered and get their lovely crinkles. :-)

Creature From the Sunset Savannah was the last project I wanted to get done for the Rainbow Scrap Challenge’s purple August. As I usually show at month end, here is my recap of blocks made from purple scraps. As usual, I’m linking up to Scrappy Saturday. 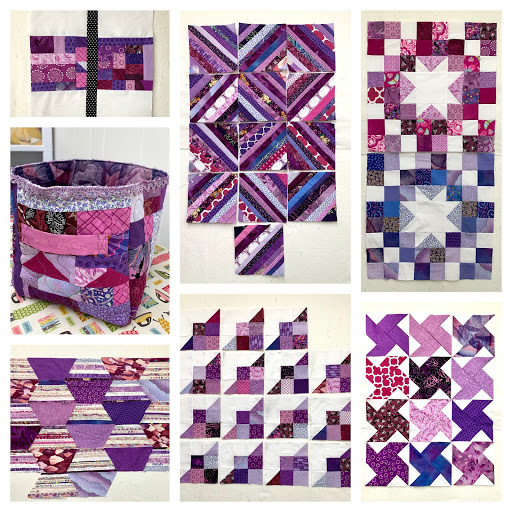 There were a total of 65 blocks this month, although one of those Beachcomber blocks (top left) isn’t pictured. I can’t wait to start a new color next week! (Can you believe that it’s almost September?) I think we’re due for either yellow or red.
I’ve spent a lot of time in the kitchen preparing and freezing vegetables from the garden. No pictures of that this week. So much has been going on..... our friends/neighbors from across the street moved away (only a couple blocks, but still, waaaaaaaah....); doctor appointments this week for Bruce, and ... he finally got his new robo-arm yesterday! Hooray!! 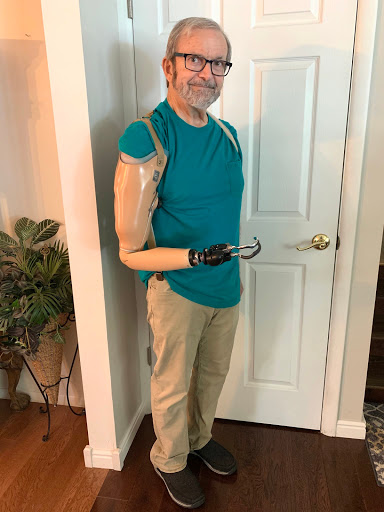 He’s supposed to wear it 2-4 hours at a time for at least a couple times per day and practice using it. He says it’s a bit heavy, but they say he’ll get used to it. Of course, the grandkids (and sons and sons-in-law) are all having fun making jokes like “be careful when you scratch your eye!” (and worse, as you can imaging with guys -  potty humor). One grandson asked if he could catch fish with it! I’m sure the questions and entertainment value of the grandkids’ questions and observations will be priceless.

And since the picture above makes it look as though Bruce only has one robotic arm and nothing else, I want to show you that all is well with his left arm too, LOL. 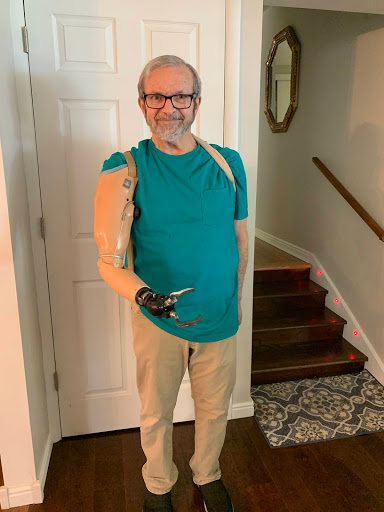 Since they had to amputate Bruce’s right arm above the elbow, he will not be able to have any finger function in a prosthetic. So they said that this double hook which grasps (opens and closes) and articulate like a wrist (spin) is the best option. He’d have fewer movement options with a phony skin-look hand. He will wear a t-shirt under it and should be able to wear a long-sleeve shirt over it in cool weather. You can see in the above picture that the length of the prosthetic from shoulder to elbow is a bit long. They’ll shorten that down the road. So, Bruce has been practicing. And every time I walk by him, he gooses me with it!  hehehe

So, after my purple sewing was done, I turned my focus to working on the quilt I’m making for my DIL’s mom’s Christmas present. Here is the first block of Tyrol. Can I say how much I love this??? 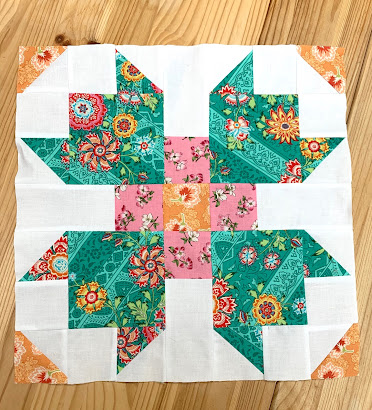 And then there were two, then three, and then FOUR! 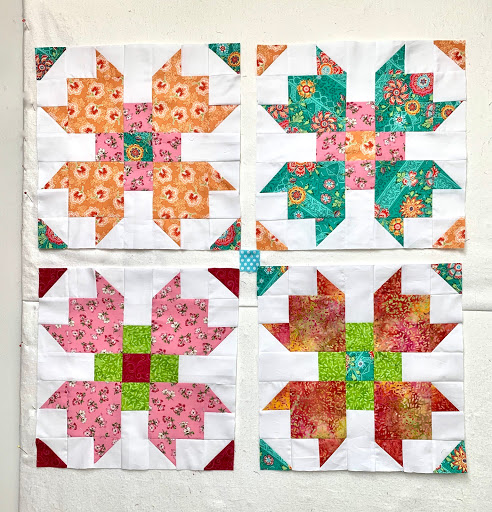 There will be 1” sashing between the blocks (the pattern calls for 2” sashing, but I’m trying to reduce the amount of white). I also have a colored border planned. This is from the free pattern by Melissa Corry called Florabelle Bloom.

I have sixteen blocks left to sew. My goal is to sew four (or more if possible) per week in order to finish the top by the end of September. I’ve been sewing these slowly and carefully to maintain all the points. That’s a new experience from the slapdash method I use on the Creature scrap quilts!

That’s about it from here. Have a good week; be safe and wear your masks in public.