When Your Brain Goes on Vacation

To be honest, I don't know if my brain has been on vacation or if it was kidnapped. Of course, that would beg the question "Who would want to kidnap it?", which pretty much answers the dilemma. I just wish it had taken me along wherever it went. But it's back now, and apparently ready to get on with blogging and life in general. So I've got a few catch-up things to share.

First, I sewed up my December blocks for the Butterfly Threads Seeing Stars Sew Along over at Diane Knott's blog. This month we're doing pinwheels, which were fun. Here are my blocks: 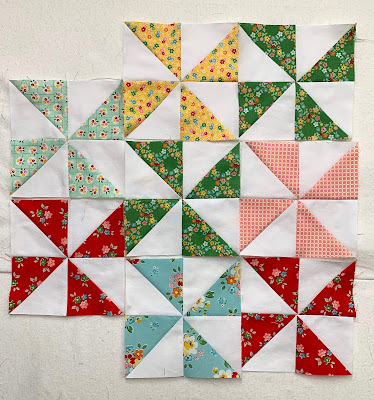 This is the 4th month of the Sew-Along, and I'm really enjoying it. I originally started out with busy backgrounds for my blocks.  The more I used them, the more I hated them. So this month I re-did a few previous blocks - the worst offenders - using plain Kona white as a background. Much better. Here are the first three months with busy backgrounds.

And here are the four months' worth, having replaced a lot of the square-in-a-square backgrounds with plain white and adding this month's pinwheels:

Four of those churn dash blocks (two in the bottom row and the two blue ones in rows above them) are likely candidates for some plain white background transplants next month!

This past weekend I also finished my Block of the Month for December for our local quilting shop's (Nuttall's) BOM class. This used a Mini Quick Curve Ruler for the petals, and I really enjoyed making these. The right one was made with the fabrics they gave us, and the left one is made from stash. 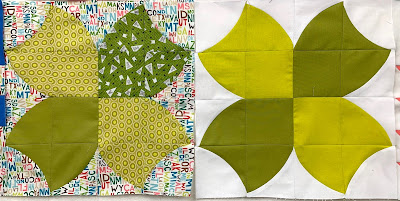 These are all four of my BOMs with their fabric so far: 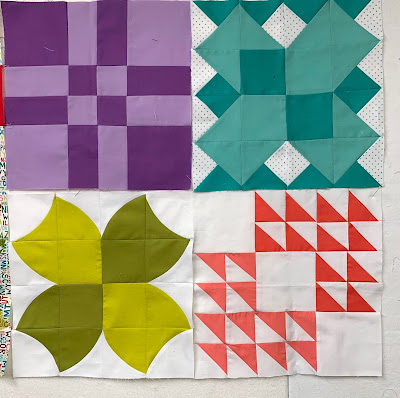 And these are my extra blocks, which will eventually make a kid's quilt for donation. Note that there was no way on earth I was going to do all those little half-square triangles again. I did a giant red nine-patch instead. 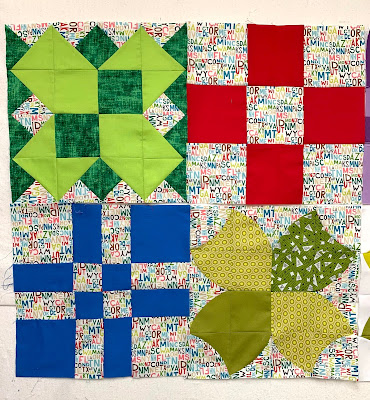 I also wanted to show you the quilt that Cousin Kim made for her son-in-law for Christmas. He is a graphic designer by trade and a disc jockey by hobby. This was a pattern from our local Shop Hop from a few years ago. The pattern had a lot of mistakes that Kim had to puzzle out and fix. You can see some spacers she had to add to the center of the two side borders. 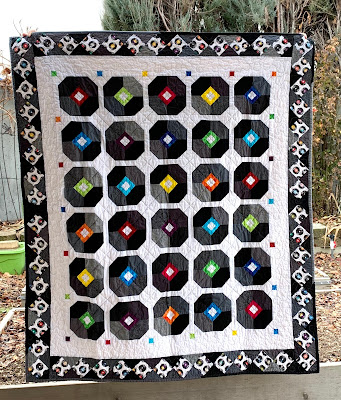 I had the pleasure of quilting it: a cross-hatch in the center portion and a basic stipple in the outer border.

My Christmas sewing is mostly complete; I just have to sew up a back for the quilt for Cousin Kim, then baste, quilt and bind it. I'll have a progress report on that this weekend. It's really the only thing left on my Christmas list. How is your Christmas sewing and shopping going?

This week is mostly free of obligations, other than a doctor check-up for Bruce's arm. It's probably too early to get all the stitches out, but at least he may progress out of the monstrous splint he's in.