Are We in a Time Warp?

Wow, the last couple weeks just seemed to speed by. But if you asked hubby Bruce, I'm sure he would say just the opposite. For two weeks he had his right hand/arm sewn to his abdomen in order for a skin flap be to acclimated (my word, not the doctors') and then grafted to his forearm, where the cancerous tissue was taken. Anyway, the flap and arm were "detached" yesterday, and he is beginning the healing process. It remains to be seen how much hand function he will retain (it looks like most, but not all) because he's still swollen and sore. But he can now get it wet and we can change bandages here at home until his follow-up visit in two weeks. The light at the end of the tunnel is here, and it isn't a train!! 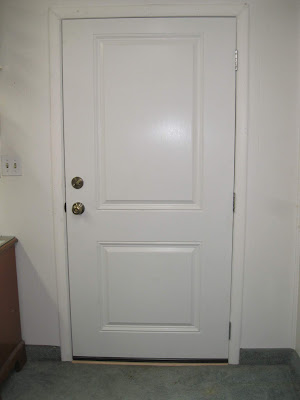 During this two weeks of self-imposed hibernation for us (it was hard and uncomfortable for Bruce to get around a lot), there was still a lot happening. The back basement door for my studio, which was ordered back in April, finally arrived and was installed.  Now, I know it's just a boring, two-panel door, but it is So.Dang.Exciting to me. The old door was beyond ugly and plain, and the screen had seen better days forty years ago. So, now there's this lovely, clean, wooden door (not steel to draw the cold in) with a lock and dead bolt. I still need to do some touch-ups around the frame, and then we'll be cutting out the carpet around the door to do a small tile entry, probably over the winter or in the spring. 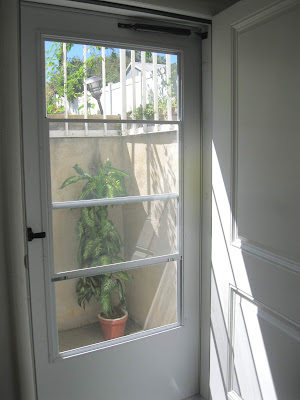 Here is the back door open with the new storm door visible. We can open the screen from the bottom up, which the kitties love. They can lay in the sunshine even if the view is only the basement stair landing and some sky (and a phony plant for some color).

We plan to get a new light fixture out there too,  but that will also wait until spring.

Another happening had to do with the apricot tree.  After the deluge of apricots this year, we were curious to see where all the branches reached when not laden with fruit and propped up with boards. Well, they reached into the power lines, over to the eaves and a bedroom window, and across and into the neighbor's yard (even though we had cut them all back two years ago). The rest of the branches (two of them) reached up waaaaaaay high or else out across the grass area (admittedly rather small) and over to the garden. Bruce had trimmed the lower, diseased branches out near the tree crotch during the apricot season. Anyway, we decided it was time for the tree to go.  It had grown way beyond its described growth when we bought it as a sapling fifteen years ago. Any future fruit would be unmanageable (especially given our aging and health issues). Believe me, this broke my heart. Our yard guys, who are arborists, felled it and cut it up in an hour flat. They left the stump at my request, so that I could put a bird house on it. We do plan to replace it next year with something smaller. 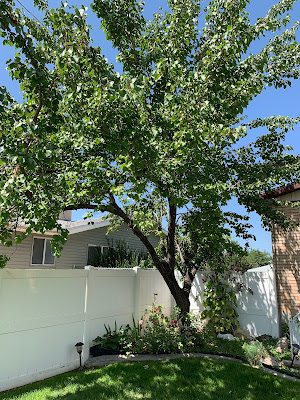 I miss the shade and protection it offered. I'm sure the birds do, too. Boomer's grave, at its foot, is no longer sheltered. My granddaughter London cried when she saw it was gone. She remembers her pre-school days here at grammy's when we used to play out in her kiddie pool and have an apricot drop right in the water for us!

I've been doing some small baby quilt quilting for Quilts for Kids. I've also got three kids quilts I've sewn up from scraps that are basted and ready to be quilted. But first, I'm working to get my August One Monthly Goal finished by month-end on Saturday.

This Firefighter quilt is made from a wonky, misspelled panel (I fixed the misspelled word by taking a tuck to hide the errant letter). The design is my own.  Currently it's basted and about 25% percent quilted. I'm doing some free-form flames. I'll talk more about it when it's done. 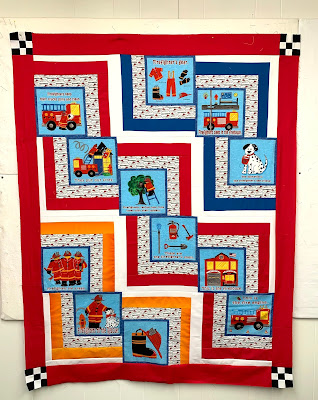 We so appreciate all the nice messages from those of you who have taken time to see how Bruce and I are doing and to express kind wishes and words of support. It warms my heart and means more to both of us than you can know. Thank you! So now I'll just the "Publish" button and get this update on its way!