A Quilt Finished and Gifted

Our son-in-law Chad has returned home for a month from a USAF assignment overseas. He will have to go back for 6 weeks at the end of the month, but for now we are all enjoying seeing him once again. Especially his wife Emily (Bruce’s daughter) and their three kids - our sweet grandkids Deacon, Abbie and Gunner. Although they were able to FaceTime daily while Chad was gone, there is no substitute for hugs in person!

Bruce and I were thrilled that they came over yesterday, Bruce’s last day home before returning to work today. Tomorrow is Bruce’s birthday - the big 70. Or as he likes to say, his dyslexic 7th birthday. Naturally, my card to him is going to be a “Happy Birthday 7-year old” card, with an “0” added in. He’s got it coming, ya know? hehe

So, I have no pictures of the happy visit. They gave Bruce a birthday present, we gave Chad his 2016 Christmas present (the quilt below). We played with the kids and then went out to dinner. Bruce and Chad had a lot to talk about. Both are/were in counter intelligence in the military with respective secret clearances and both are engineers. In fact, if you think of “Q” in the James Bond movies, that is what Chad does. Naturally, their talk was very general, but they had fun comparing places and equipment (1970’s vs today). And it was fun for us to hear about the lifestyle and foods of the place where Chad is stationed.

Anyway, here is a picture of the quilt that I whipped up in record time. Remember, it was a pre-printed panel from Pattern Jam, although I did get to pick out the fabrics before printing. 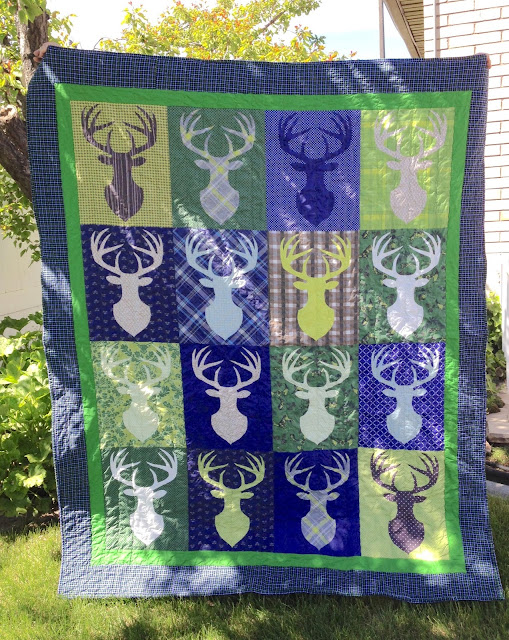 Look! We took the picture outside! The quilt finished at 62x75” and was quilted with straight (but squiggly) lines.  Chad loved it, and as they are moving to the greater Denver area later this summer, it will come in handy during the winter months.

This quilt is my third of my Finish-Along Second Quarter Goals. It is #7 on the list.