This quilt was officially finished about a week ago, and I did mention it. But I wanted to give it its own introductory post so it will qualify as a finish for the 2017 First Quarter Finish Along.  My Quarter I Finish Along Goals are here. This quilt is #5 on the list. 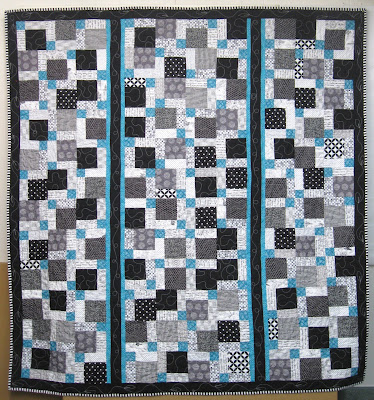 It’s a Disappearing 9-Patch with a couple vertical stripes added for interest. I wanted to do something with black, white (and gray) and a color, and this was it. The binding is a basic stripe and the back is solid teal. It will be gifted to one of my BILs next time we visit Arizona. And because it will be used in a warm climate (but they do have cool winters and cold nights), the batting is merely flannel instead of warmer cotton batting. 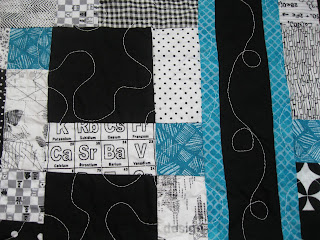 The quilting from this relative beginner is mainly stippling and loopy lines. Men don’t care, right?

The news on DH’s arm was not good. Both lumps were malignant, as we suspected. Surgery to remove them will be on Monday morning. There is hopefully enough tissue remaining (from previous surgeries) to remove the cancer. They will keep going until they get “clear margins” in their immediate biopsies. However, because the long-term biopsies (a week or more to get results) are more telling, the surgery itself will be staged. Monday is the first stage. No skin grafts will be done until the long-term biopsies come back clear. If biopsies are not clear, they will go in and take more tissue - or whatever they need to. That is the elephant in the room that we are aware of but choosing to ignore for now.

Please keep a good thought for DH. The irony of the whole arm cancer thing for Bruce is that he used to be a medical engineer, and worked for Symbion and Robert Jarvik (think artificial heart). Bruce also worked on circuits for the Utah artificial arm (a prosthetic) and other medical assist devices.

In a lighter vein (pun intended), I’m working on a fresh new springy quilt for myself while DH is trying to decide which of the several guitar quilt patterns (and then colors) he wants for his new quilt this year.